Due to how lengthy development has been for Ether and due to other factors, I've decided to drop the idea of having the game split into 3 episodes.

This is mostly due to the fact that what was originally planned to only be episode 1 will be a pretty much full length game in its own right and the story will be able to stand on its own just fine.

I realize I may have overreached a bit and been a bit overambitious as to make 3 episodes of the same length without a full team, so it makes sense to scale the game down like this and instead save the ideas I had for episodes 2 and 3 and merge both into Ether 2.

As a result, I will not release the entire game for free, but I'll make sure to have a short demo available when the game is complete that will be available for free. This demo will consist of the first area of the game to give players a good feel for the game.

At some point, I'll close the public testing phase once I get serious about selling the game. I truly hope you guys will continue backing the project once I reach this stage. The plan is to finish the game and sell it on itch.io, with plans to bring it to Steam and GOG.com eventually.

TLDR: Episode  1 of Ether is going to be the first game to shrink the scope of development. Episodes 2 and 3 will be merged together as Ether 2.

We're very happy to welcome Kuro to the team. He's already done some work on Ether, having redesigned Proto and given her more of an anime look. He will also be doing designs for other characters in the game. 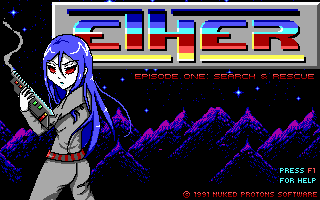 ETHER finally launched a new test build today, almost a year after the previous one. A big reason has been that almost the entire game has been overhauled with levels made entirely over again from scratch. The reason? For some reason I decided to make the game in a 640x400 resolution despite the graphics being made in 320x200. This resulted in some weird artifacts that made the game feel a lot less authentic. I decided to change the resolution down to a native 320x200 for this reason but this required everything to be overhauled. It's set me back a fair bit but I still aim to have Episode 1 done by 2019.

Some new features added to the game:
If you are interested in testing the game, please get in touch with me on Discord:  https://discord.gg/NPtUuNm
Posted by Alyxx at 12:50 No comments:

Since the last update I've been working hard on the game and added a ton of new stuff that I hope testers will enjoy. A new build will be ready soon but meanwhile, here's a list of stuff that's been added and fixed so far.

The music tracks for areas 1 and 2 have been expanded upon and worked on further to add more variation and make the tracks longer.

There's now a dynamic camera system in place. Pushing up and down on the keyboard will now not only aim up and down while jumping, but also tilt the camera further up or down to allow the player to view more of the level above or below them. This is to prevent "leaps of faith" and allow the player to attack enemies above and below them more easily. 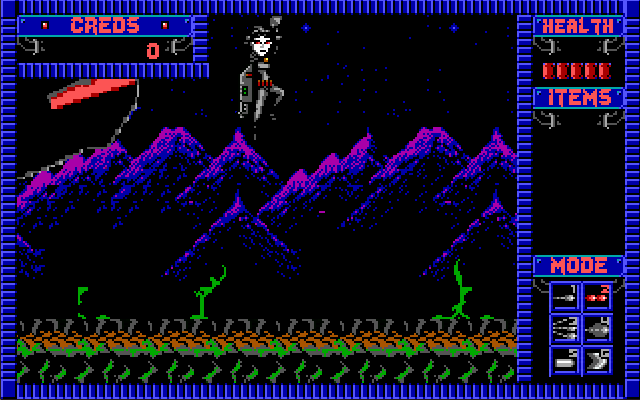 Some platforms can now be jumped through as well as leaped down from by pressing crouch and then letting go of the crouch key. I plan to get a system in place where you can hold crouch and press jump to do this (Contra style) but have had some problems working this out. This will come in a future update hopefully. 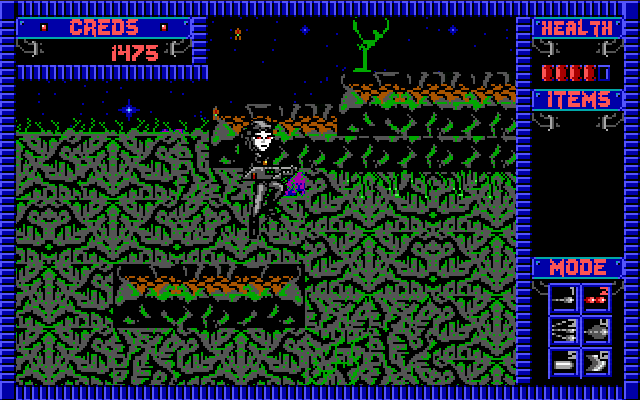 Testers will notice there have been new enemy placements in the early levels. This is to ramp up the difficulty a bit and make them more challenging. Also, in the previous build, enemies would stay dead but now they respawn when you re-enter the level, to allow a bit of creds farming as well as continous action.

This brings me on to the subject of the revamped save system. Earlier the game would use Game Maker's built in save function as well as having persistent rooms. This has been scrapped in favour of a custom save system that gives me more control over the game and prevents a lot of nasty bugs that arose from using the built in save system. I remember distinctly that for every new update, players had to overwrite their old save files because they would be corrupted. This should not happen anymore as the game now uses far more reliable save files that should be more futureproof.

I've also added a proper pause function to the game and the pause menu now brings you back to the main menu if you quit from the game, instead of quitting the entire game.

There have also been a ton of minor bug fixes to the game, so the game now overall feels a lot more polished compared to the previous build.

A new build should be available fairly soon. I'm mainly going to focus my work on the new area of the game now.
Posted by Alyxx at 14:31 No comments:

It's been long due for an update on the development of ETHER, our main game in development.

Took a bit of a break during Christmas and early this year but now we're back in action and working on the game again.  So here's an update on what's been done so far.

After some tester feedback on the graphics we decided to give the tilesets and some of the sprites an overhaul. Here's how the game currently looks: 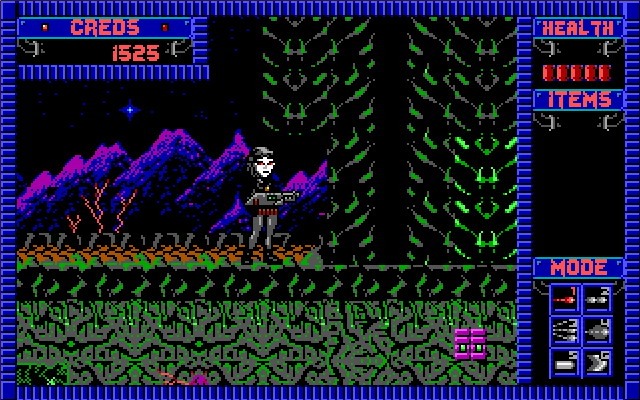 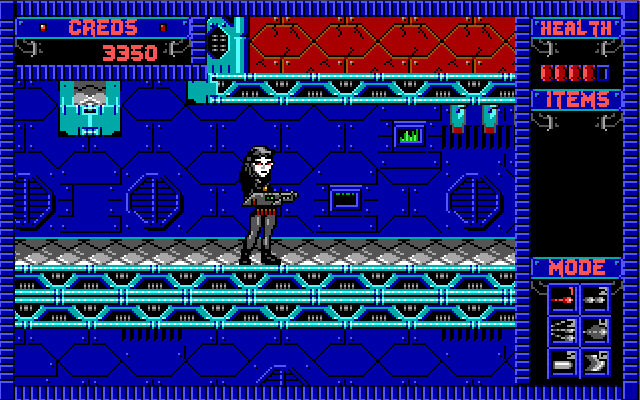 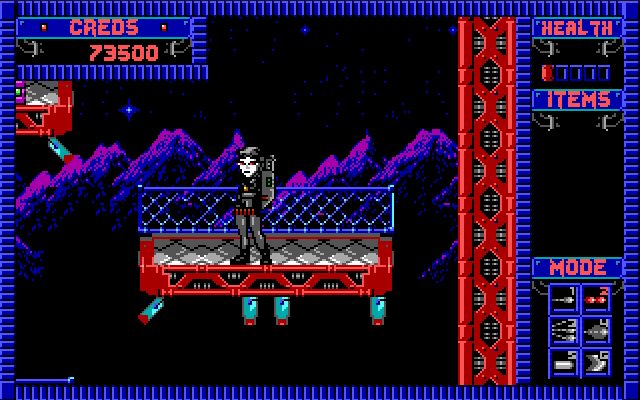 There's not a massive difference in the base tileset but the jungle tileset has been completely recolored to give a darker "night time" feel as well as more variation in colour. The backgrounds have also been kept to darker EGA colours exclusively to make a contrast with foreground objects. There is also gonna be more palette swaps during some of the levels to add some variation to the graphics.

In addition to the new graphics there has been some new features added. The dodge mechanic that we showed in earlier screenshots is now removed in favour of a more fast-paced action-oriented gameplay. The character now runs at a slightly faster speed, and can aim up as swell as crouch using the UP and DOWN keys for some more dynamic gameplay. 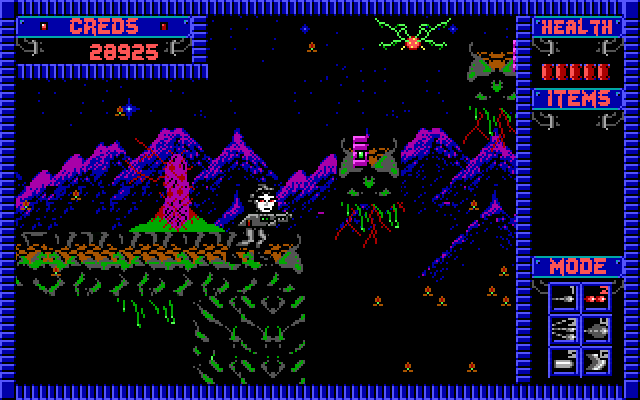 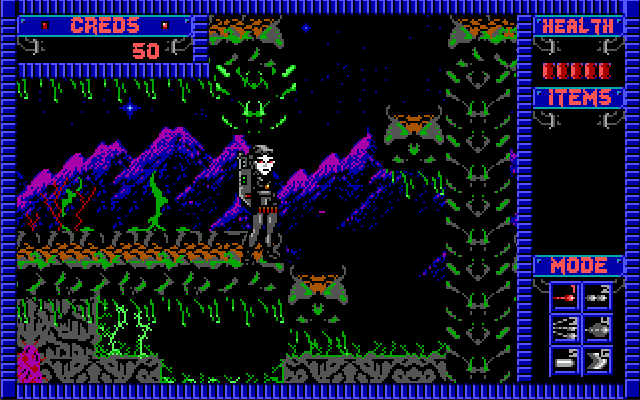 Really looking forward to getting the new build ready. Currently working on the third area of the game which is the safe zone where you'll meet some of the non-hostile characters in the game.
Posted by Alyxx at 08:57 No comments:

[ETHER] More weapons and other changes 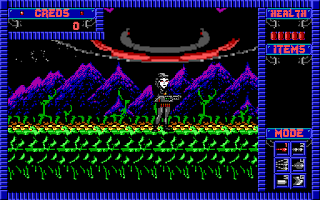 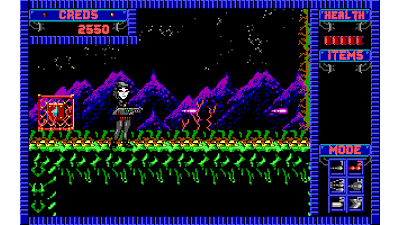 As you can see by the above screenshots, I've now started the process of adding the game's six weapon modes, which in the end will be purchasable using creds from vendors, so unlike the screenshots, not all modes will be available from the start (for now they are due to testing purposes). So far the planned six weapon modes are:
The weapons will be selectable with the numeric keys on the keyboard.

Other minor additions to the game after tester feedback:
So far development is going pretty nicely and I can't wait to get more stuff done. Developing the weapon modes is going to be a very fun and integral part of the game.
Posted by Alyxx at 11:48 No comments:

Added a new easter egg today. Can't wait for people to find it once the game is released, I'm pretty sure a lot of oldschool movie fans are gonna love it though, if you don't get it it's fine. :P

Also realized something today. For the longest time, my rooms haven't been persistent which caused all kinds of grief since I am developing a non-linear game where you can explore and go back and forth between rooms. I thought I would have to write some sort of script to keep track of what enemies and objects still remained in a room. NOPE! Turns out Game Maker has a built in function for this exact purpose: Persistent rooms!

I did notice the little checkbox in the room editor and was like "... why have I not used this before?!" It literally fixed the biggest worry I had about the game so far programming-wise but now I can actually make sure that once you kill something, it stays dead and once you pick up an item, it's gone as well. So I'm really happy it was that simple to implement.

Tomorrow I'm going to maybe work on the final level of the jungle area and add in a new enemy type. Development so far has been extremely brisk and I'm looking forward to seeing how this game will shape up in the future!
Posted by Alyxx at 13:00 No comments: